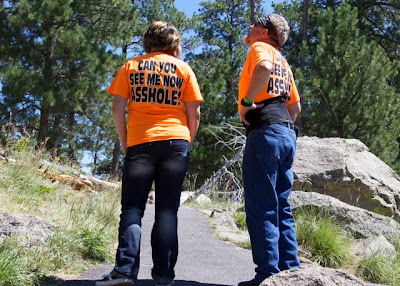 One word: Sturgis. To anyone who has ever sat on a motorcycle that word brings to mind images of the biggest biker rally in the world. For the last 40 years, during the first two weeks of August, about 500,000 bike enthusiasts from all around the world turn this sleepy little town in NW South Dakota into a sea of black leather, tattoos, and every bike ever made, with the strongest presences being Harley-Davidson…of course.

As a climber I had never heard of this event, and was therefore oblivious to the rally’s schedule. Wednesday, Aug 11, was the day to ride to Devils Tower for a little sight seeing fun. August 11th was also the day the Smileys arrived on scene, being out-numbered by the bikers 50 to 1.

Approaching the Ranger Station to check it prior to climbing the Durrance route we walked slowly, taking it all in. A friendly guy, sporting a 12 inch fu manchu, filled us in on what was going on. Seeing our ropes he asked us,

Biker: “You gonna climb it?”

Biker: “wooow, how long does it take?”

Smileys: “about half a day.”

Biker: “How do you get the rope up there?”

Biker: “wow, man, that’s crazy, I don’t get why you would want to do that, but good luck man.”

This became the standard protocol series of questions during our two days at Devils Tower. We got asked them so much that we started being sarcastic, which went something like this when they saw us carrying our ropes:

Biker: “You gonna climb it?”

Smiley: “No man, I just carry this around to look cool…..Is it working?” As we continued walking with a stupid little grin on our face.

The Durrance Route is, in my opinion, the easiest route of the fifty. It took us a mere three hours round trip, and was a great break to the loose rock and chilly weather in the Canadian Rockies. There were two other parties on the route when we rolled up to the base at 11:30AM. The Rangers told us that the first group started at 6AM that morning, and in 6.5 hours had made it up only two pitches, and they were working on the third pitch! The other party was on pitch two and had been at it for 4 hours. We decided to give them a little more time and just watched from the hikers trail that loops around the tower.

We watched climbers, talked to the bikers, answered the same questions, and soaked up the sunrays as the air temp rose to 95 degrees. An hour later we made the short walk up to the base of the route and roped up. The rock was almost too hot to touch, and had we not just spent a month freezing our butts off in Canada we might have just retired to the shady East side of the tower, but to us the warm rays were welcome with a smile.

Linking up the first two pitches with a little simal-climbing brought us to the second belay anchors. At that belay we caught up to the lower party of two who had decided to bail due to their lack of water. They were new to the multi-pitch world, which prevented them from going higher/faster, but they were stoked regardless. It was refreshing to see someone so jazzed just because they out there climbing. To them, it didn’t matter that they didn’t touch the top. With a sincere and excited tone they wished us well as they began their descent.

Their energy was refreshing. Made me feel like this old crusty jaded climber, worried only about “how fast I could get the route done, and nobody better get in my way and slow me down.”

With this paradigm shift I climbed up the next pitch and encountered the next party, who had been on the route for about 8 hours. It was two teenage boys and their 66 year old dad. I constructed an anchor 10 feet higher than the bolted anchor and as I brought Janelle up I started chatting them up. Being low on energy and even lower on water it took a little time for them to start talking. It was their first multi-pitch route for the boys, and dad hadn’t climbed in years. I gave them all my water, encouraged them with a few helpful time-saving tips, and we kept moving.

We touched the top, and were back down an hour later. That evening, as we chatted with a couple other climbers in the near-by campground, the rumble of motorcycle engines died away, the silence was broken by distant calls to one another from the party of three still on the route. Come to find out the next day, they experienced the Durrance Route for 18.5 hours before making it down! It reminded me of when I was their age, learning how to climb, going big, getting “benighted” (when night falls while still on the route), having an epic, then going back to high school on Monday and telling everyone how sweet it was with the biggest smile on my face.

If those guys ever read this post, I really hope they are still stoked to get back out on the rock, try even bigger objectives, and not let a little severe dehydration get in their way of pursuing their passions.