What the Heck is a Grepon? 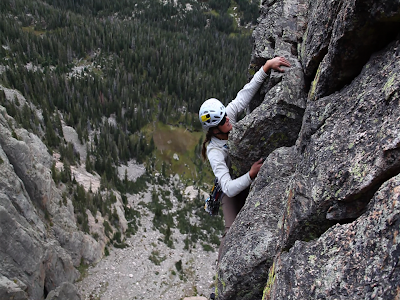 We had made plans to climb the Petit Grepon with a friend, Summer and her friend Julie. Summer joined us for our climb of Castleton Tower and was now back for more fun with the Smileys. Camping in Estes Park is a total nightmare, so the night after our Hallett Peak climb we went into stealth mode in a hotel parking lot.

Climbing Hallett was hardly what the doctor ordered to get rid of Janelle’s head cold. She was still congested the next morning, but hey, the sun was rising in a clear sky, and we had plans to keep. The Safeway donuts were still warm as we returned up the road to the same parking lot as the day before.

The hike in passed quickly, as we had friends to talk to. Its funny how you run out of things to talk about after five months in a van with the same person every waking hour, so the fresh topics were warmly welcomed.

The sky was blue as we approached the base of the climb and tried to figure out where the “real” start was. Often, simply finding the route is one of the hardest parts of these climbs. At the top of pitch one we felt the first raindrops, so we huddled into a small alcove, dawned the rain jackets, and proceeded to have a great time. Fifteen minutes later we were back at it, making our way up this amazing pinnacle. I led Julie and Janelle led Summer. Most of the pitches are pretty interesting, the climbing is varied, and the rock is not too loose. We dubbed Summer “camera girl” for the climb, and that was a real treat. That honkin’ camera takes great photos and video, but man, its heavy.

With a little route finding and a lot of laughs we were at the base of the final pitch, which is also the crux. At 5.7 it’s a pretty stiff 5.7 if you ask me. Maybe I didn’t see or use all the good holds, but it made me work. The 4 pitons you clip through the crux make it feel like you are sport-climbing. Sport-climbing on old pitons that is.

The summit is only about 20 x 10 feet wide. Summer threw a fit as I unroped to stand on the very top. I got a few quick photos and then tied back in to prepare for the descent. Dark clouds were moving over the mountains on the horizon, and we knew they could be carrying a fair share of lighting. Picking up the pace we began our descent.

The topo says, “Look for the hard to find rap anchors.” Well, turns out they were really really hard to find, cause we didn’t. I searched high and low on several ledges with no luck. That’s about the time it started raining.

On a sunny day we might have looked a little longer, but this was a cold rain, and we still had to get four people down at least three more rappels. So tied a cordellete around a small tree, Janelle backed it up I started descending another 200 feet. At the end of the rope I was looking at a fairly sheer wall with only a little alcove to get in. The rain was coming down now and the ropes were wet. The last thing I wanted to do was rap off the ends of my ropes, so with 10 feet of tails left, I pulled them up and tied the ends together. That gave me the confidence to lower further down and get into the alcove. With the winds and rain there was no way to communicate, so I just fed out as much slack as possible so the next person could rappel.

I began constructing another anchor while the girls rappelled. A few rocks came shooting down, but thankfully the wall was overhanging enough that I wouldn’t get hit. I was able to make the next anchor with two nuts side by side, clipped a non-locking biner through both wires and taped the gate shut (this is the poor mans locking carabiner).

Pulling the ropes is always a tense moment. If, when you pull the rope through the anchor that is now 200 feet above you, they get snagged on rocks or trees above it can be a real drag. We were all soaked to the bone at this point, as well as the rock, so climbing back up to retrieve a snagged rope would be grim.

We pulled the ropes, giving a huge rodeo whip right as they began to fall, and lucky the came all the way down to us. Now there was one more 200-foot rappel to get to the gulley below, I sent the girls down first. By the time it was mine turn, I had been standing on this tiny ledge for about an hour. Everything slows way down when you are cold and wet. I reached my shivering right hand back to my hip and unclipped my belay device, pulled up slack in the drenched ropes, and clipped in. One more double check and I started down.

The ropes were so wet at this point that as they ran through my belay device, it rung out the water from the ropes, completely soaking my crotch. That sucked. Nothing you could do about it. No matter how I squirmed in my harness the water just kept flowing, soaking the only dry part of my clothes. After pulling the ropes (with only a small snag), I waddled over to where the girls were trying to get out of the rain. Their efforts were unsuccessful.

The hike out warmed us up, and by the time we got back to the car we were laughing again. A dash of grandpa’s cough medicine and we were warm on the inside too.

Driving out of the Park our conversation was chalk-full of what we were going to eat, war stories of the day, and laughter. That is, until we saw flashing lights coming up fast on us. Busted. Apparently, Summer had not been playing within her lines, and the cop (surprising nice) wanted to make sure we weren’t some dirty hippie hawked up on booze and happy smoke. He thought we were high cause of all the laughing we were doing, but we assured him that we are about as square as they come, and he sent us on our way with a couple recommendations for dinner.