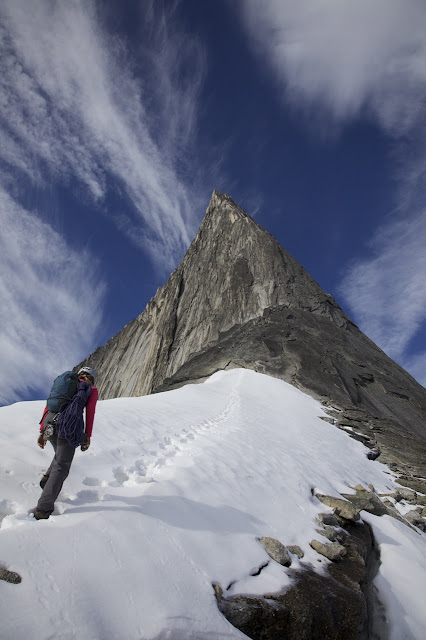 [Disclaimer: I have had several major epics in my climbing career that have taught me many valuable lessons. My epic-ing frequency has drastically decreased due to completing several AMGA guide certification programs, and climbing with a female. I empathize with the people I write about below.]

Bugaboo: (mining term) The promise of a motherload that never pans out.

Bugaboo Provincial Park is an alpine climber’s playground. The campground is beautiful, the rock high quality, and the company entertaining.

This was our second time to the Bugs. This sophomore experience was quite a bit different than the previous year. For one, it was about 20 degrees colder.  Second, we only “had” to complete the Bugaboo Spire on our list, which is significantly easier than the Becky-Chouinard on South Howser Tower, so the stress level was low.

That low stress led us to get a late start the day we went for the Bugaboo Spire. We left camp around 8:30AM, crossed a small glacier and scrambled up to the base of the route.
At first glance I knew we were in for it. Four people standing at the bottom of the first pitch of the route. Then I looked up and saw three more climbers on pitches one and two. This was going to be a long day.

The guidebook clearly states, “More people get ‘benighted’ on this [East Ridge of Bugaboo Spire] than all other routes in the area combined.” This is due to the involved traverse from the North to South summit, and then the lengthy descent. 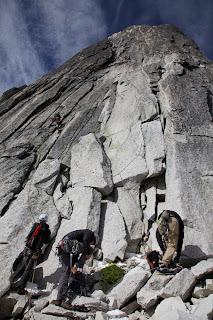 The two parties on route (2 Ottawans and 3 Texans) were much slower. They started from the Hut at 4:00AM. We started 4.5 hours later and caught them on the first pitch. There were two more parties of two (Salt Lakers and the Squamishers). All told there were 11 climbers.

Normally in that situation you would just pick a different route, but the forecast was not amazing, and this was what we came to do. This is one of the major downsides to having a tick list.  We sat down and started shooting the bull with the Salt Lakers. Meanwhile, the Texans were struggling. They were climbing in a group of three, catapillar style (where you climb one person at a time). The Texans offered to have the Salt Lakers pass them, which was really thoughtful. I wondered if we could pass them too. The route allowed for that as there are many cracks that are not too difficult. What to do what to do.

That’s about the time the Squamishers showed up, guns blastin. (Ill call them S1 and S2).  S1, “Oh maaan, what are you guys doing moving so slow, you’re going to spend the night up here moving like that.” I was shocked. I did not know what to say. And so it went.

The Squamishers tried immediately to pass by climbing some other crack stating, “Well it can’t be harder than 5.12…”  Oh man, this guy was a character. In the meantime the Texans third person was now climbing and the Salt Lakers were right on their heels, as requested. Janelle jumped in right behind them. She built and anchor below the Texans and brought me up. The Squamishers started right behind me. It was the start of an impressive climber train wreck.

I decided to stay below the Texans and traverse to the left of them. If we moved fast enough we could pass them in two short pitches. I moved to their left. Built a quick anchor, brought Janelle across, and started climbing again. This move allowed us to be around them with no problems. That is, until the Squamishers came up, pulling their rope straight through through everyone’s business.

It is difficult to explain here exactly what he had done to create such a mess. Just know that if anyone had slipped, it would have caused several other people to be pulled off as well. It was almost like the opening scene of Vertical Limit, only not as dramatic. 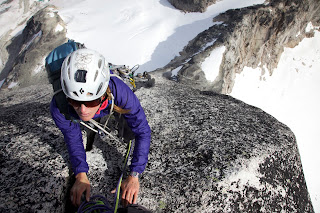 I’ve never told anyone that what they are doing is dangerous, and they need to stop, but S1’s actions had crossed the line in my head. I piped up, “Dude, you need to stop right where you, down climb 15 feet and build an anchor so you don’t kill someone.” From below the Texans shouted “AMEN!” as they were trying to sort out the rope tangle. S1 ignored me, mumbling something about moving faster. I could not believe it. The Salt Lakers were moving quickly, and as soon as possible we moved up to the next belay ledge. 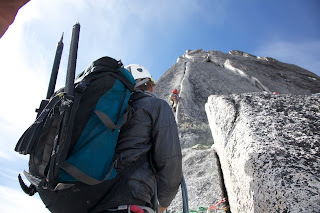 This is where the route enters a 5.6 chimney or a 5.9 hand and finger crack. The Ottawans were struggling with the 5.6 due to the amount of snow choked in the chimney from the storm that passed through a couple days prior. The Salt Lakers headed up the 5.9. We began chatting with the Ottawans, who were eager to have someone else do the snow excavating. I looked down, saw the S1 coming up to the belay ledge, and quickly volunteered for the job. 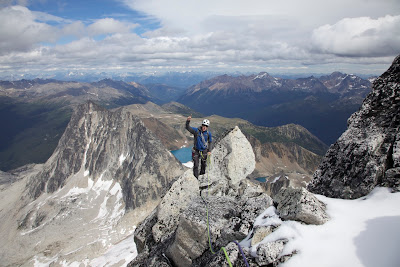 Pulling snow off hand and footholds is not very much fun, but still way more fun than talking to the jerks. On this terrain we were able to move quickly enough to get ahead of the Salt Lakers as well. From that point on the climbing went smoothly. 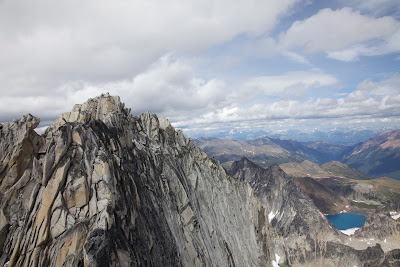 The climbing is really diverse and beautiful. The traverse between the two summits is somewhat involved, but amazing in its own right. I would not want to do it in a lightning storm, but who would. By the time we were heading down the clouds were growing dark, so we put it in high gear.  This allowed us to get back to our tent only minutes before the cold rain started to fall. 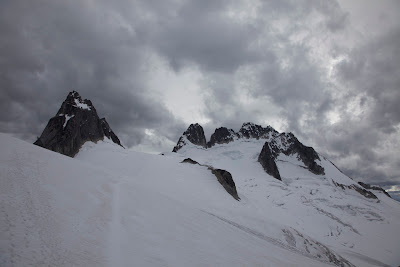 The Texans, Ottawans, and Squamishers were all still out there. We wished them well, cooked dinner and went to sleep to the sound of rain hitting the tent. I was so glad to be in my shoes and not theirs. At 11:00PM I got out of the tent to answer natures call and saw two little headlamps still descending from the route.  Typical for the Bugaboo Spire.

The following day the Texans got back to the Hut at 2:00PM. They had had an adventure. “Its all part of the Bugaboo experience” they kept saying. Awesome. Even though they had bivyed in the freezing rain, ran out of water, they still had fire in their eyes. 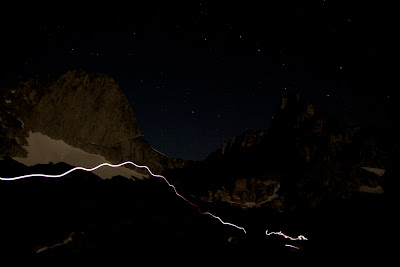 That’s one thing I love about loving the mountains. They can fully slap you around, make you run for mommy with your tale between your legs. Then the next week their allure makes you want more the next day…or maybe the next week.
by: The Smileys at 10:21 PM 4 comments: