Second Half of Half Dome 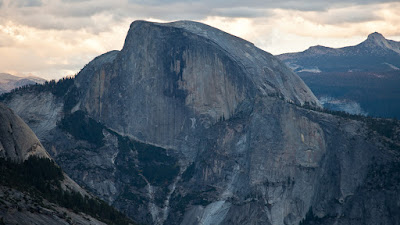 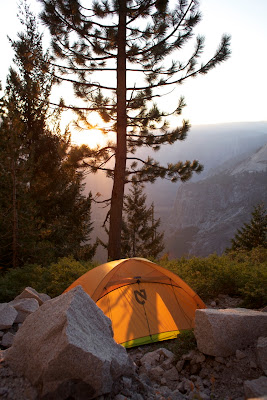 Expectations are ever present when returning to a previously attempted climb. In 2010 Mark and I tried to finish our climbing season in Yosemite, CA on the picturesque Half Dome. We were unsuccessful. I was tired from a demanding summer full of adventures and planning and was not too thrilled to jump on another climb, but I knew it meant a lot to Mark, so off we went.

To get to the base of the route we scaled up steep rocks slabs.  Followed by even steeper pitches, including hand over hand rope moves, all this while carrying a heavy haul bag. This was on Mark’s back because the shear weight of it was beyond my ability to carry. We thought it would be a good idea to spend the night half way up the route, which meant we had to haul all our equipment up the wall. Four pitches up and many hours later we had not moved very far up the wall. Our bag was getting caught on everything; we were not going to make it to the sleeping ledge at the pace we were going.

So we bailed.
Not a word was spoken the rest of the day.
It was not Mark’s idea to bail. 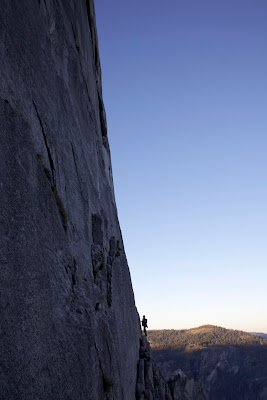 Like last year, Half Dome was the final climb on our schedule for the year, but we were both ready to finish the climb this time. We had to get up 23 pitches using only 11 hours of daylight. This race would be demanding.

We started climbing at 4am. To save time, we each attached ourselves to a fixed rope with a Petzl Tibloc (a simplified ascending device) to self-belay ourselves. Without a proper belay, we had to be in the mindset that we were basically free soloing the first five pitches. If one of us did  fall the Tibloc would bit on the rope, and arrest the fall (hopefully). It was too scary to trust it, so we climbed like we were not going to fall.

Right off the bat I realized my shoes were too big…. What? I had worn them before several times, so why now were they too big? I started slipping and sliding around in them so I put on my socks to fill the void. It did work but I felt my precision was off.

After we ran out of fixed rope we started to pitch it out and do a little simal-climbing, where both climbers move at the same time.  As the route wondered the quality of the climbing deteriorated. Once we arrived at the chimney pitches the climbing improved again, and it was really exciting and airy climbing. Luckily, I was leading so I didn’t have to carry the larger backpack up the tight squeezes. There were some interesting pitches as we approached Big Sandy Ledge (which was not as big as expected). Followed by the more demanding Zig-Zag pitches. Mark took off from the ledge placing tiny pieces, and clipping the amazing amounts of fixed gear on route. I followed with amazement knowing this route has been freed. It was now my turn to lead out on the “Thank God Ledge!” 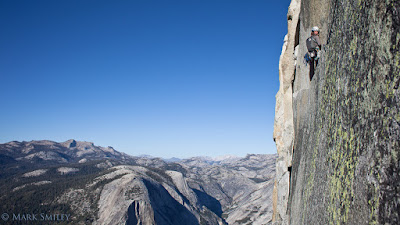 I started out thinking, “I can do this, this is not too bad.” Then the 10 inch ledge narrowed to 8, then 6 inches about the same time the wall pushed out to vertical, and then a little past vertical. I paused, turned around and told Mark I was tired of being scared, but I also knew it would not be any easier to follow. With some angry aggressive words I crawled across the tiny ledge to where it finally got wider, and therefore more secure. 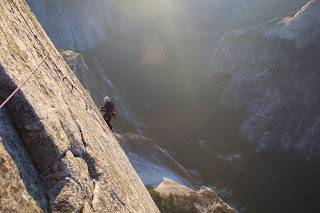 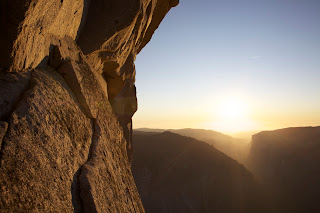 Mark finished the last couple pitches to land us on the top right as the sun set. We did it, we made it up the Regular route on Half Dome in 14 hours! What a summit, and what a great way to finish 2011. We found our way down the in the dark back to the base where our sleeping bags were waiting for us. I had expected better quality of climbing, but I was overall extremely impressed with the rock, the climb, and the entire experience of climbing such an iconic piece of rock.
by: The Smileys at 12:29 PM No comments: