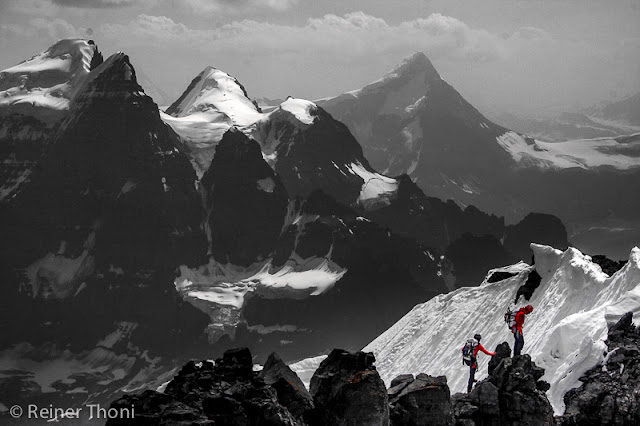 Janelle and I headed west after climbing Mt Waddington, and met up with a ski mountaineering racing buddy, Reiner Thoni, who lives in Valemount. As a local, he had always wanted to climb Mt Alberta, so we asked him to join us. Reiner is crazy strong, always positive, speaks Canadian, and therefore was a great moral booster for us, as we had just been skunked on Mt Robson for the third time (I released the Mt Robson video out of order).

After doing route research, the mandatory creek crossing seemed epic. Wanting to hedge our bets, we borrowed a raft, packed up Lulu, and made our way to the trailhead road pull off, which is right in the heart of the Icefields Parkway Road. Loading the raft with our expensive camera gear, we each took a side and jumped in the fairly swift glacier melt. The creek was not nearly as bad as the online trip reports let on. Only getting up to our thigh at the deepest part. The raft was total overkill, but whatever, it was fun.

The 6 mile (9 km) hike into the little hut went by fairly quickly. Isolated thunderstorms were moving through the area, which made talus hopping a little more exciting. Thankfully, it was sunny for the grovel up Wooly Shoulder's gravel slopes. Wooly Shoulder was as bad as trip reports made it sounds. One step up, 1/2 step back. At times the baseball sized rocks in a 10 foot diameter around me started moving, like a mini rock avalanche! Hitting b-fast I powered across like Mario as the rocks slid down behind me.

Once at the hut (reserve through the ACC prior to arrival), we settled in as a wall of water soaked the landscape. The States needs more backcountry use huts like these. They are low impact, and allow climber's and hiker's to travel with significantly lighter loads. 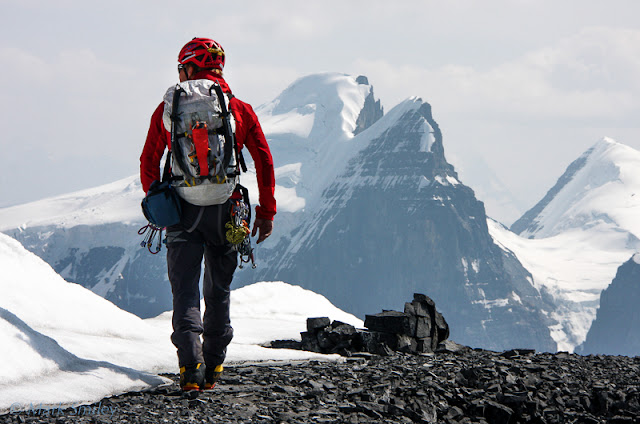 The coolest part of the hut was its guest log book. Climbing accounts from Vince Anderson, Steve House, Jason Kruk, other classic climbers, hikers, and more. Many accounts of getting skunked by weather, bad rock, and how many 11,000ers people had done. The last successful summit of Alberta was logged back in August 2009!

The best account was by a couple guys that were lucky to have perfect weather. They got up super early, eagerly rappelled down to the base of the steep North Face of Mt Alberta, looked up at the looming vertical wall and, "realized we forgot our man pants, so we went home." 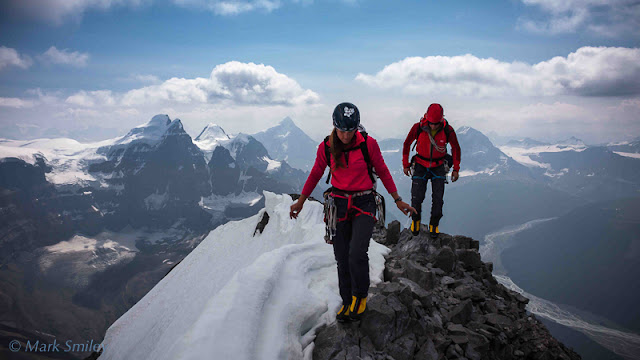 Our strategy was to climb this bad boy in one push. Fast and light, aka, long and semi-light. We started sometime before sunrise, made our way down and across the toe of the glacier in the dark. The sun started rising and we enjoyed amazing morning light hit the North Twin peaks. This time of the morning is pretty special. The climb hasn't started, you're finally awake, nervous about what is to come, yet excited that it's finally time to get the job done. Alberta stood over us in the dusk, the sky was calm. Time for an adventure.

We started a rising traverse to the west on loose gravel. The lower flanks of the mountain are, more or less, a giant stair case. The landings of these giant stairs are completely covered in ball-bearing-like rubble, which forms 20-30º slopes. The vertical part of the stairs is merely "pre-rubble". One step up, half a step back. We milked "easy vertical" on snow patches when available, hopping from snow patch to snow patch. 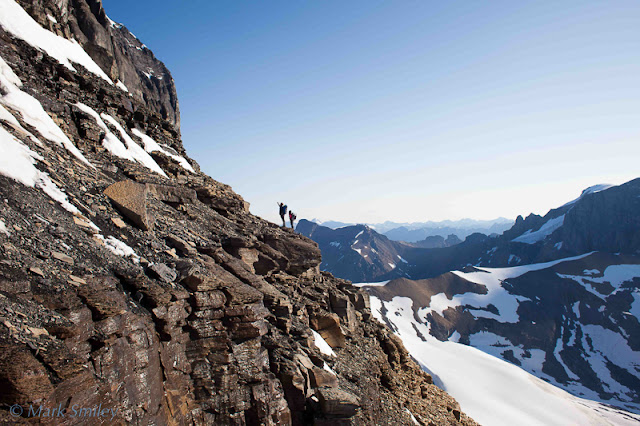 Once on the top step, of the mountain's lower third, we turned back east, and traversed for a very long time along one of these 20-30º rubble steps. The next piece of the beta puzzle was to locate the "third elephant ass." That was the key waypoint where you start up the low 5th class climbing that takes you right to the summit ridge. As we stumbled along, our imaginations turned everything in to an ass of one animal or another. We ended up walking too far (we would discover later), turning us into the ass.

Not wanting to back track, and knowing that the gully directly above us was part of 'the way', we climbed directly up a 60º tongue of snow that ended as a one-foot wide icy point.  This point had pulled away from the rock wall two feet from melting, forming an imposing moat. Pulling those first moves from the snow to rock and finding a "good" (at least, for the Canadian Rockies) anchor turned out to be the crux of the climbing. Nothing like getting the crux over with during the first moves. 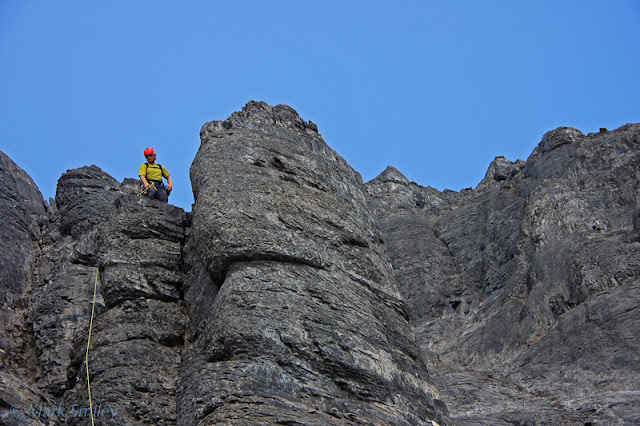 Two pitches, and three cam placements, later officially we joined the normal Japanese Route, as signs of fixed sling anchors became very obvious. We picked our way along. Janelle had no interest in leading, so I got to lead all 7-8 pitches. I cant remember how many we did it in now, as some were short and others were the full 60 meters. Pitch length was dictated by where I could build safe belays. 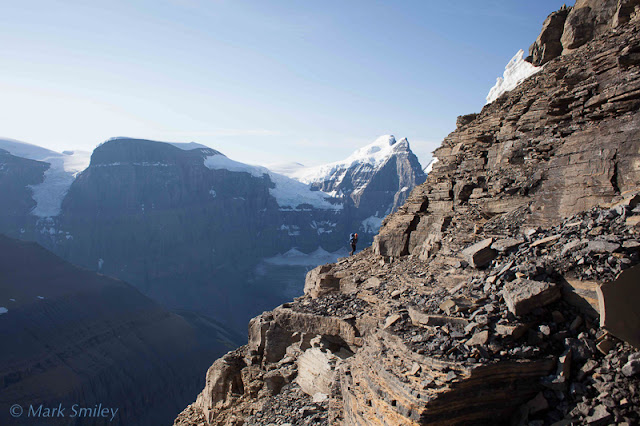 7.5 hours after leaving the hut we reached the summit ridge. The sky was still beautiful, and there appeared to be little snow on the ridge, so the hast that accompanies most alpine adventures eased a little. We picked our way along the ridge, sometimes walking, sometimes climbing, but always taking a bunch of photos. On the summit someone had left a Japanese umbrella, which I thought was nice touch. We hung out for half an hour, taking in the views, recharging the batteries with some power food, and then headed back. The summit ridge was far and away the best part of the experience. 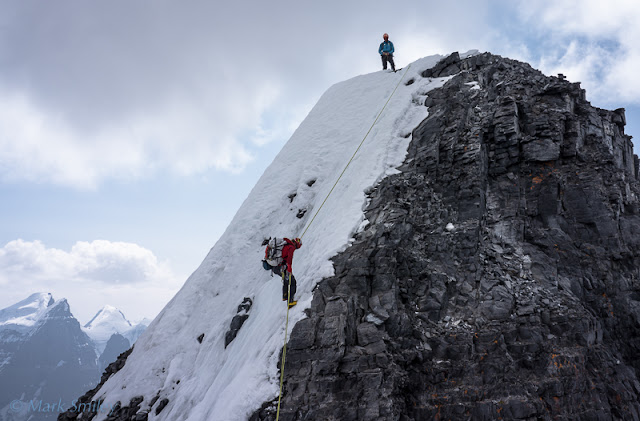 Rappelling down went something like this:
1. me down, Reiner down, Janelle down.
2. Pull the rope
3. Quickly cover head with backpack as the falling rope dislodged rocks that showered us. While the rocks are falling, the primal urge to tuck my head into my shell kicks in. Which is actually just shrugging my shoulders with my chin against my chest, but for some reason it feels like the protection level has increased.
4. Dust off, collect rope, check for rope core shots, rap down with saddle bags to the next anchor
5. repeat steps 1-4 x 9

We made it back to the hut with daylight to spare. It had been a great adventure.

Climbing the Japanese Route on Mt Alberta is like being in 7th grade. There were some good parts, a lot of crappy parts, and I really don't ever want to do that again.  Yet somehow, for some unknown reason, deep down I know that it got me one step closer to earning my man pants.

Beta:
-watch the video we made of the climb here
-rack: BD C3's full set, C4 .4-#2 full set, no nuts, didnt need tools or crampons (condition dependent), 2 60m Sterling Photons 7.8mm, slings to back up anchors, man pants.
-route can be done in a day with good conditions, a light pack and good beta.
-Link to a very rough outline of how to get to the hut. The trail is faint at times, but never totally gone. walk on the left side of the creek 95% of the time.
-shoot me an email with questions: www.smileysproject.com
by: The Smileys at 12:00 AM 4 comments: