Did you really call it, "Mudstone"?!? 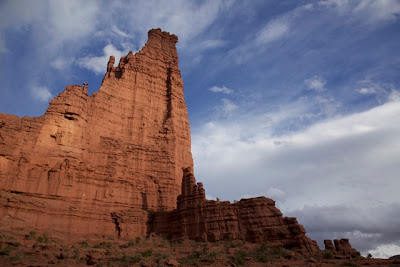 The overused joke is:
Q: “How can you tell its spring time in the desert?”
A: “Cause all the license plates turn green.”
It’s true, Coloradians flock to the Moab area in Eastern Utah to make their goggle tans fade while biking, rafting, hiking, National Parking, climbing, 4-wheeling, canoeing, and RV-ing.

We had our eyes set on completing #28 of our quest, The Titan via the Finger of Fate route in the Fisher Towers group. At 900 feet tall, the Titan is the largest freestanding sandstone tower in North America. Utah is home to several different types of sandstone, all of which vary in hardness. The majority of the Titan is made of “mudstone”, and as its name implies, it is the softest, and scariest, type of sandstone.

Imagine God taking a big handful of extremely wet mud-infused sand, makes a fist, and lets the sloppy contents drip from His hand, creating this tower. The rock is extremely breakable, unconsolidated and crumbly….and we got to climb 700 feet of this stuff!

The waning gibbous moon was high over our heads, birds were singing, and my heart was pounding as we made our way along the well-beaten path at 5:30AM. The first rays of sun hit the top of the Titan as we came to the base of the route.

Gearing up for the first pitch I was kicking myself for not throwing down the money needed to purchase a set of tri-cams, which were “highly recommended” for the route. They work best for protecting the many piton scars on the route. Instead, I had a triple set of black diamond C4’s, a double set of C3’s, and a set of standard sized stoppers. I call this my “Im scared rack”. Its heavy, but I know I’ll have the gear when I need it…hopefully.

Pitch one was slow. Every hold had to be dusted off, tested for strength, and then committed to with a grimace. As I made my way up, little chunks of rock fell down the route. Janelle had to stand back from the wall to prevent getting pelted. I was placing gear like crazy, every 2-3 feet. I did not know if my gear would hold a fall because the rock was so soft.

Janelle hates jugging lines more than I do, so she decided to French-free as she climbed. The backpack was really heavy, and the first pitch is very vertical. The heavy backpack pulled on her while she climbed, making for a very unpleasant experience. She screamed for me to take up the slack as she desperately grabbed for the next piece, hoping it would not rip out on her as she pulled on it. I have learned over the years that when Janelle gets scared she tends to express that fear by screaming at me. Then I take offense and yell back at her for yelling at me, and then our happy-life-plane goes down in flames.

This time I remembered all those other bad experiences, and decided to learn from them. I encouraged her lovingly. Telling her that she could do it, and how much I agreed with her that the heavy backpack does suck. When she arrived at the belay ledge, I gave her space, then looked at her empathically. It worked! She said she didn’t want to lead any of the pitches, but she would follow. With Janelle back on board mentally, I headed up pitch two.

The A3 crux comes high on the second pitch. This is where I really wanted those tri-cams. With a #2 C4 cam slotted in vertically, with its outside lobes totally tipped out and barely touching the loose mud, I pulled straight down on it, which allowed me to see the next thin seamed crack up and to my right. I tried unsuccessfully to get in several pieces, and finally sunk a thin offset peenut (stopper). Now I had to commit to it. These two pieces looked horrible, and the one below that was not much better. Meaning if I fell, I would probably go about 40 feet! Carefully I pulled on the C4, then shifted my weight to the peenut stopper, and stood up. The next piece was a rusty fixed knifeblade piton that was bent over at its head. By this point I did not have many other options, so I clipped it, yarded on it, and was through the crux.

The rest of the climb was rowdy. Pitons coming half way out of the rock, 1/8th inch bolts that had been placed 50 years ago, 5 piece anchors connected by sun baked webbing, and a bolt ladder that was missing a lot of bolts. This bolt ladder was placed by the 6 foot 4 inch tall Layton Kor, back in the early 60’s. Standing in the highest rung of my aid slings I was still about 8 inches too short to reach the next drilled piton. After trying every way possible for about 10 minutes, I reached for a double-length sling. Putting on my mental cowboy spurs and wide brimmed hat I took the sling, whipped it around a couple times, then lassoed the piton 5 feet above my head….on the first try! I could not believe it. Amped, I pulled myself up the thin cord, clipped in a quickdraw, and the business was over.

The remainder of the climb went smoothly, and as we topped out dark clouds were on the horizon. Rain + Mudstone = Crumblestone, so we put it in high gear to get back on terra firma.

Back in the parking lot we lounged in Lulu and celebrated our adventure with cold drinks, chips, salsa, and a grand view of that amazing tower. Looking at the tower post climb was a different feeling from looking at it the many other times I had seen it in the past. My eyes could trace each part of the climb. Every aspect of the route now had a tangible feeling associated with it. I had experienced that rock, in a way that only other climbers who have touched the top can look at it. This was an amazing adventure climb.

That evening I told Janelle I would never do that route again. Now that a couple months have past, I would climb the route again in a heartbeat (equipped with tricams of course).