After our time in the Bugaboos, Canada, we headed south, back to the Motherland. Driving through Montana we were excited to easily interpret the speed limit signs, have working cell phones, and buy “half-priced” gas.

Before long we were in one of my favorite places, the Tetons! Janelle and I have traveled here at least once per year since we meet 6 years ago. The Upper Exum Ridge was one of my first alpine climbing experiences. We honeymooned in Jackson. Janelle became the US National Ski Mountaineering champion at Jackson Hole ski resort. Needless to say, I have many fond memories from being in these mountains.

I first heard about the “Grand Traverse” during one of my early visits.  This Traverse links all 7 major mountains in the range (with a handful of smaller peaks in-between).  I hoped that one day I would be strong enough to tackle such an endeavor, and on August 24th that day came.

Last year we climbed the North Face of the Grand, and the only classic climb remaining was the North Ridge on the Grand. The glacier to get to the route can be broken and nasty this late in the season, so we concluded doing the Traverse would be the best/most fun way to approach the ridge.

Having climbed in the area my fair share, I knew that route-finding was going to be a crux of the experience. There is a lot of terrain to cover during the Traverse, and getting off-route would simply burn precious daylight. We collected quality beta from pataclimb.com, some Exum guide friends, and other friends that had done it before. The best tip was to take only one 70-meter twin rope, which helps with the long rappels.  We took our Sterling Ice Thong 7.7mm rope....super thin!

The other major crux is getting your pack as light as possible. We simply wanted to climb fast with a light backpack. So we bribed our friend, Rob, into porter-ing our sleeping bags, pads, and extra food to the Lower Saddle campground on the South side of the Grand Teton. He was cheap, so it worked out well. =)
The plan was to climb the “Cathedral Traverse” (Teewinot, Owen, the Grand) day one, sleep at the Lower Saddle, then finish the Grand Traverse on day two. We left the parking lot at 4:00AM with happy (light) packs, amped and moving fast. There were several forest fires in the area, and the air was thick with smoke, which made breathing a little difficult. Halfway up Teewinot we got above the smoke layer just as the sun was rising. It was amazing. 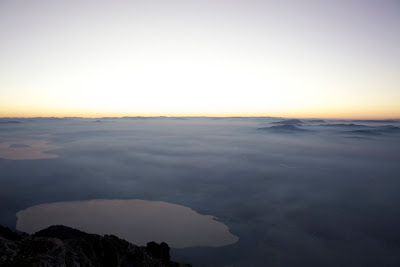 Reaching the top of Teewinot in a few short hours we were rewarded with the most spectacular view of the Grand Teton’s North Face. 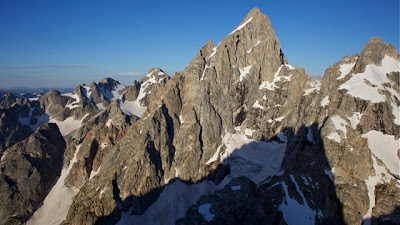 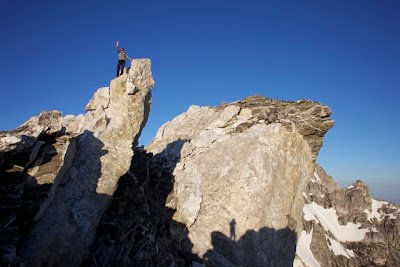 From there the terrain is fairly easy 2nd-4th class until the first rappels. At this point another “traverser” caught up with us. He was doing it solo. I offered him our ropes to rappel, instead of using his own. From there we moved together to the top of Owen, crossing mostly broken rock, some quality rock climbing, and a little snow. 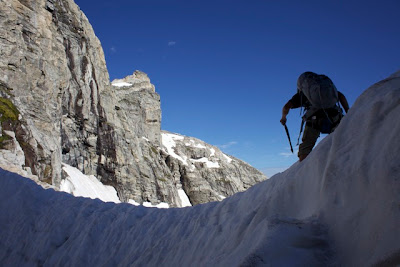 Some say the crux of the route finding is getting from the summit of Teewinot to the Gunsight Notch.  Last year, Janelle and I climbed the Serendipity Crack on Owen, so we had seen this terrain. That experience helped keep us moving quickly. From the Gunsight Notch up to the Grand Stand is the highest quality climbing on the North Ridge, in my opinion. 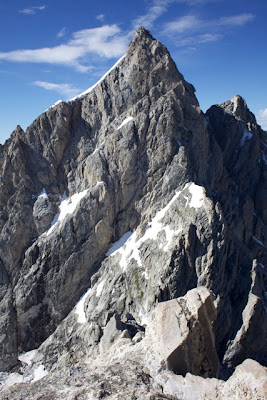 Once we got to the North Ridge proper there are two main ways to go. The Italian Cracks or the Chockstone Chimney. The Chockstone Chimney is the route listed in “the book” so we went that way. There was a small section of ice to chop through, but compared to Mt Hunter it was cakewalk. The climbing in the chimney was really good too.  We decided to pass on taking rock climbing shoes, so pulling the 5.8 crux in my guide tennie approach shoes helped keep it real.

From the top of the chimney the climbing is straightforward. All paths lead to the top. On top, we hung out for a while, soaking in yet another Grand Teton experience. This route was way more enjoyable than the North Face, which doesn’t take much since the N. Face is a big pile of crap! 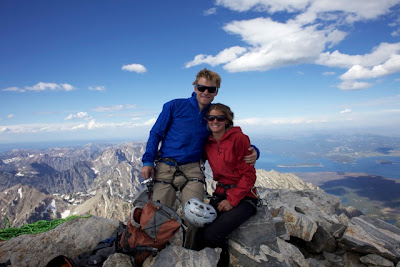 We arrived at the Lower Saddle campsite around 5:00PM. Rob had delivered the goods, and we were eating dinner that he carried up for us shortly thereafter. We wanted to be as nice as possible to him, so we did not have him bring up a tent. Well, that backfired on us. At 6:00AM the next morning we awoke quickly to rain drops hitting our sleeping bags, then hail! We threw all our stuff together and ran for shelter.

There were thunderclouds to the West, approaching fast. Our plan to complete the Grand Traverse we getting washed out. Janelle and I looked at each other, wondering what the other person was thinking. Should we keep going? Should we bail? Just then a big flash of lightening in the distance sealed Plan A’s fate. We reluctantly decided walk down and get breakfast in town. 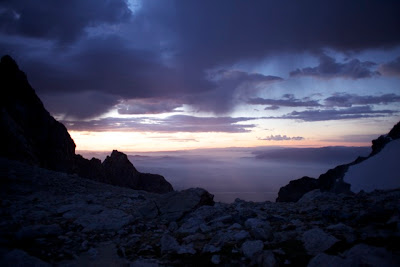 I hate bailing on my plans in the mountains, especially when the ski clears halfway down to the car! I couldn’t believe it. At 6:00AM it looked like Zeus was having lightning bolt target practice with the Tetons, and then at 7:00AM it was bluebird. I was pissed to make the wrong decision to bail. Regardless, we kept walking downhill, back to the van. At 8:00AM dark clouds rolled back in and unleashed a rainstorm full of lighting. Standing under a big pine tree, out of the rain, I was smiling ear to ear. We had made the right decision. Amusing isn’t it, how the same decision can be good one moment, bad the next, and then good again.

The Cathedral Traverse is by far the most fun I’ve had in the Tetons, and I recommend it to anyone interested.
by: The Smileys at 3:44 PM 2 comments: