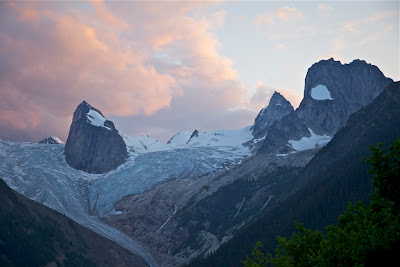 Out of the many climbing areas in Canada, I was most looking forward to climbing in the Bugaboos. Even if you don’t know anything about the area, the name alone makes you curious to know what its like. Many of my friends had visited, coming back with great stories of short approach alpine climbing on rock comparable to the granite in Squamish and the “good stuff” in the Tetons.

As we drove Lulu down the 26-mile wash-boarded dirt road, which takes you to the trailhead, my excitement level grew. Rounding a corner, at mile 25, the trees parted just enough to get our first look at the range. The granite towers were like hung fangs that shot out of the broken glacier, trying their hardest to bite high into the sky. The sun was casting its evening rays of orange and purple onto the surrounding clouds, it was amazing.

Upon reaching the parking lot your attention is grabbed immediately by the site of chicken wire fences around every automobile. The tops of these make-shift fences are held against the cars with three foot tall wooden posts and the bottom is kept against the ground with a softball sized rock every foot. All 35 of the vehicles in the lot were equipped with this accessory, and it looks truly bizarre. A psychology student could write their thesis on what goes through peoples’ minds when they see this scene. Even if you have no clue what purpose chicken wire serves, there is probably a 99% chance that you too will dig through the big bin of bundled wire, provided by the Provincial Park Service free of charge, and take the hour needed make your vehicle look like everyone else’s. I don’t know if the term used would be “group think” or “the power of suggestion”, regardless, everyone follows suit and fortifies their vehicle to mimic the rest.

The reason for the chicken wire fences is that back in the day, probably 20-30 years ago, hungry porcupines would crawl into the car engines and chew the hoses. I can just picture the look on his face when that first unlucky victim got back to their rig after a wonderful time of climbing to find fluids soaking the dirt under his engine and a fat porcupine running off into the brush sporting a radiator fluid stained beard. It was probably on the 26-mile walk back to civilization that those guys thought of the chicken wire solution. Since then, no one dares to be the one to “test” whether or not the porcupines have lost their taste for anti-freeze and rubber hoses.

With Lulu fortified, we hiked into the Applebee campground. This place is amazing. It did cost us $80 to stay for four nights but that includes pit toilets, running water, food boxes (to keep the chipmunks out), the nicest camp manager who provides the printed weather forecast every evening. That forecast called for clear blue skies the following day so we geared up for the larger of the two Classics we were there to climb, the Beckey-Chouinard Route on the South Howser Tower. We heard that three other parties had their sites on that route as well. Eight people on a 16-pitch climb can be a recipe for disaster, but we were willing to take that risk cause it could be weeks before we got a similar forecast. Janelle and I decided to do the start the climb from the campground, which would add a good 2-3 hours to the day. Our aversion to heavy backpacks made that decision easy. The other six people decided to make their summit day a little shorter by approaching the climb and bivying at the base of the route. The alarm went off at 2:00AM, and after hitting snooze twice we started moving.

The hike across the glacier went smoothly. Our time working on Mt Rainier has giving us a comfort for glacier travel, so we decided to do the entire thing in our tennis shoes, un-roped so we could move faster. Two and a half hours later we were at the base of the technical climbing. Two minutes after that the next party showed up, and ten minutes after that all eight of us were gearing up for this route. I took the lead and raced up the first pitch. We were moving as fast as possible, but next party caught up to us as Janelle led pitch two. No climber ever wants to get stuffed by another party, myself included, but these other guys were not only super friendly but were also really strong climbers. At the third belay ledge I offered them the option to pass us, but they declined. The six of us were moving pretty well, and the only bottleneck came at the two 5.10 crux pitches, which was expected. The last party, #7 & 8, slowly fell behind as the six of us progressed. The climbing itself was amazing. Every pitch called on a different style of climbing from ones climbing skills toolbox. From finger cracks, to off-width, chimneys to laybacks, stemming and face climbing, this route has got it all. On top of that every pitch is long and sustained from 5.7 to 5.10. You can’t ask for much more than that. To top it off the forecast was accurate, and we were making new friends as we ascended this amazing tower.

Traditionally, we save our sandwiches for the top, and have therefore been coined, “summit sandwiches”. These sandwiches are always the most desirable food in our packs. Like the carrot hanging in front of the mules nose, these sandwiches would motivate us to get to the top. After about 10 hours of climbing, our energy stores were depleted, so we broke tradition and ate them a pitch or two below the top. With boosted energy we finished that last bit of climbing and started down. The two parties below us quickly caught up as we searched for the second rappel station. Knowing that these guys where kind enough to let us stay in front the entire day, and the fact that it would take a while to get three separate parties down the eight rappels, we offered to join forces. They agreed, and we formed a chain ropes down the wall. Everyone doing their part to make it go as quickly as possible. We called it the Becky-Chouniard Rappel Highway. A couple hours later the six of us were back on the glacier, grinning from ear to ear. We had done it!

The next day we slept in. When I finally got up around 10:00AM, I walked over to the tent belonging to the last party on the route, guys #7 & 8, to see if they had made it back. You see, there have been several times early in my climbing career that I have been “benighted” (when you are still on a route, and the sun sets, and you had not planned on spending the night on the route), and I wondered if that happened to them. These guys were younger climbers and were relatively inexperienced to the majority of old crusty climbers that visit the Buggaboos. As I approached the tent I listened for any movement. Not hearing anything I unzipped the rain fly and looked in. They weren’t there. “Oh no” I thought as the image went through my head of those two guys hanging in their harnesses half way up the vertical wall, shivering to stay warm.

Dark clouds began to build that afternoon, and by 3:00 they unleashed. It rained for a solid hour, with periods of hail, and frequent claps of thunder. As Janelle and I sat in our warm dry tent, my thoughts were on those guys, and it made me grimace. Being out that long, you are definitely out of food, probably water too, and you are just over it. After the storm passed I started asking around if anyone had seen the guys yet. No one had. Naturally, everyone’s mind turned to their personal best “epic” story from their days in the mountains. “One time I had to go 24 hours with no water” and “My first time in Alaska I didn’t screw my water bottle shut all the way and it soaked my sleeping bag and parka at 17,000 feet”. Everyone had at least one story to share. It passed the time well.

Finally, at 8:30PM, 50 hours after they started the adventure, the two young climbers walked slowly into camp. Cheers came from everyone as they made their entrance, and before they could drop their backpacks we flooded them with questions. I will not recount their tale of torture, but I will mention a few of the phrases they used: “Rope snagged”, “just moved slower than we thought we would”, “Split the last pack of Gu for breakfast 12 hours ago”, “Four inches of hail”, “Slept in our harnesses on pitch 13”. We were all glad they made it back in one piece.

It rained for the next three days and so we left the Buggaboos without completing the NE Ridge on Bugaboo Spire. That means we will have to return next year, which is fine with me.