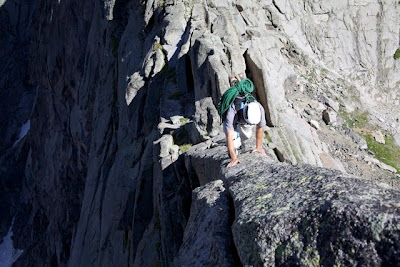 As Lulu barreled down the 30 miles of wash-boarded dirt roads that access the trailhead to the south end of the Wind River Range Janelle and I took bets on how many cars would be in the parking lot. I put my money on 8 cars, Janelle went with a whopping 32. Our jaws went slack when we got our first view of the lot, over 100 vehicles packed like dust-covered sardines in this remote location in central Wyoming. Going with Price Is Right rules Janelle won. I tried to make the case that we both lost with weak mumblings about being too far off to really count.

My first thought was, “wow, this place must be really beautiful to attract so many.” That was followed shortly by, “oh crap, these climbs are going to be as crowded as Yosemite!” Janelle’s brother, Jeremy, was joining us for the weekend, and a party of three on rock routes added to the complexity of the adventure, especially if there were several others parties on route.

The 9+ mile hike into the Cirque of the Towers, up over Jackass Pass, is enough to make anyone’s brow glisten with a hint sweat. That didn’t bother us, we were pumped, the day was beautiful, the trail relatively flat, and we realize that the busy parking lot was the main jumping off point for many different outdoor enthusiasts, not just climbers. Rolling into our chosen campsite around 3:00PM we had a spectacular view of both classic climbs, the East Ridge of Wolf’s Head and the Northeast Face of Pingora.

As a climber, I cannot just look at rock of that high quality and not want to climb it…right now! So I wiped that drip of sweat off my brow and we rallied to climb Wolfs Head with the daylight we had left.

Our hearts started pumping as fast as they were climbing up and over Jackass Pass, only now it was from excitement as we approached the climb. We left the rope on the backpack and scrambled up the first several pitches. Some of the pitches made the hair on the back of my everything stand up. Watch the video for more on that. I was glad it wasn’t windy as we balanced on the foot wide plank of solid granite, with over 1000 foot sheer walls on either side. I felt like a little cat climbing along God’s rock fence, thousands of feet above the deep green alpine lakes.

Upon gaining the high ridge we had to negotiate a series of rock towers that were the final obstacle before the summit. There is not a great description of the climb in the guidebook, so we had to pick and choose which way around each tower we should go, north side or south side. On the first tower I chose the south side. I climbed along this ever-narrowing rock ledge. In the course of 15 feet this ledge shrunk from three feet wide to a mere six inches! At this point the ledge dropped off and created a gap about four feet wide. On the other side of the gap the route continued. How in the world was I going to get across this? After scratching my head for a while I got Janelle in a place that she could safely belay, wrapped all ten toes around the very edge of the rock, and let my body fall forward. After want seemed like an eternity my out stretched arms landed on the other wall. As looked down the gap, and realized that I was a Jackie-Chan-like-human-bridge over a thousand-foot drop. That is some exposure! I quickly found the right cam and hurriedly stuffed it in the closest crack, clipped in the rope, and hauled my carcass across the gap.

The rest of the climb had several other positions that made one think, “wow, that’s airy”. I loved it. It was far and away the best 5.6 route I’ve ever done. But don’t be fooled, this is old school 5.6. I have done 5.8’s that were easier…consider yourself warned.

The next day was beautiful as well so we shook out the lactic acid on the 30-minute approach to Pingora. This tower has a striking appearance. It is a perfect tower. As for what the tower is guarding, I have no idea.

Honestly, the climb itself is just another rock climb. It is cool, but after the exposure and awesomeness of Wolf’s Head, it was pretty hoe-hum. I don’t say this to insult Pingora, rather to further comment on just how cool Wolfs Head is. It’s a climb that should be on everyone’s list…even if you aren’t a climber. You should pick up the sport just so you can climb this mountain. Sure there are crowds of people on it, the mosquitoes could carry you away, and the hike in is forever, but man, want a cool experience that I want to relive at the drop of a hat.
by: The Smileys at 3:46 PM