Devils Thumb via the East Ridge 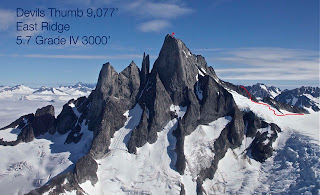 Only a handful of climbers have set eyes on the Devils Thumb. Even fewer have put their hands on this stone. The weather is notoriously bad there. Some climbers have flown up from the Lower 48, only to sit in Petersburg for 10 days, waiting on clear skies that never came.

Pointing Lulu north, we drove for 2.5 days from Seattle to Prince Rupert, BC where we got on a ferry to travel the rest of the way on the Alaska Marine Highway. At 3:00AM we arrived in Petersburg. The sunlight was already beginning to grow on the eastern horizon, and Devils Thumb was out. It was the start of a bluebird day. At 8:00AM we stopped by the Temsco hanger to see if we could fly that day. The lady in the office called the pilot, Wally, who told us he could go at 2:00PM!

Amped, we went into town for some breakfast and to get geared up. Taking over three spaces in the harbor’s parking lot, we spread out everything and stuffed it into two duffles, two packs and a couple other random bags. The climb would only take one long day. Regardless, we took food to be on the glacier for twelve, which would hopefully be enough to wait out the bad weather, complete the climb, and get out.

The heli flight is a really efficient way to blow 600 bucks in 29 minutes, but it is totally worth it. Like a nature viewing three-ring circus on crack, the varied landscapes flew by. Passing over an inlet, then deep forest, followed by glacier, these views fit the bill for what a Jack London Alaska should be.

After landing we pitched the tent, made dinner and went to bed at 7:00, hoping to get an alpine start the next morning. Around 10:00 that night I woke to sound of rain hitting the tent. Welcome to the Devils Thumb.

For the next three days it rained and snowed. The emotional swing one goes through by sitting still for that long is amazing. After sleeping for 12 hours, you cannot sleep anymore. Thankfully we had cards, an ipod, and books to pass the time. The rain came in waves. We would peek our heads out during the lulls, and getting out only when the call of nature became a scream.

On the fourth day the clouds began to break in the afternoon. Blue sky is so glorious after that long living in a milk jug. This far north the sun is up nearly all day, so we were able to take advantage of the sunshine to dry out everything. Ropes, clothes, sleeping bags, and climbing gear where spread out on top of the tent to let the sun work its magic.

I barely slept that night. In the last three days I had gotten about 30 hours of sleep, and now the stars were out over the Devils Thumb, I was just too excited.

At 1:30AM the alarm went off. An hour later we were walking across the glacier toward the start of the East Ridge. There was a breakable crust layer on the snow, which made for slow going, but I was amped and charged through it to the rock.

The first selection of rock was totally crap. The rock was loose, covered in frost, muddy and downright scary. I had to pick my way up very slowly as to not knock down any rocks on Janelle. When we gained the ridge, and the early morning sunlight hit our faces, things were better. Janelle was not having the best time though. Her pack was heavy, making it hard to climb. The fact that we kept our mountaineering boots on made it even harder. We pushed on, simal-climbing half way up the first tower. When the hand-holds got thin I decided to make an anchor and pitch it out. On top of the first tower we went back to simal-climbing.

The traverse into the base of the second tower is pretty spicy, knife-edged awesomeness. I had the GoPro rolling for the whole thing, so check out the video for a real “description” of that section.
At the base of the second tower we put on our rock shoes for the first time. That made the world of difference. Angling up and climbers left (south) I picked my way though what looked like the path of least resistance. 2.5 pitches got us back to easier terrain. At the gendarme there was rime ice choking the path on the ridge, so we wrapped down 200 feet to the south. This put us on extremely loose rock. To make matters worse the rime ice we were “avoiding” going this way was now directly above us. The hot sun caused several chucks to fall on us. That and we had to climb through a significant section of wet rock from this ice melt.

Once back on the ridge the terrain was straightforward. Back to simla-climbing, we progressed quickly. At this point Janelle was really shaken from everything. It had been harder than 5.6 climbing on loose wet cold mossy rock, with a heavy pack for the majority of the climb. Not a girl’s favorite thing. I was still going strong, but feeling Janelle’s fear more and more as we got higher. On the last pitch of the route, on the summit ridge, she broke down. “I’m done”, she said. She was ready to get off this thing.
I couldn’t believe it. We were literally within 5 minutes from the summit. The Canadian side of the summit ridge was totally covered in snow, more moss, and ice, making it slow going. We had climbed the route, but I wanted to touch the top. I’m a dude. I need that definitive end point where I can brag to everyone that I “did that.” Janelle did not need that. In her mind we were there, the clouds were moving in, and she had had enough.

I shouted down to her that she could stay where she was, and I would un-rope to scramble to the “tippy top” (as we called Columbia Crest on Mt. Rainier). With the response I got, you’d think I just said I was going to cut off her toes with a dull knife. “NOOOOO, please don’t leave me here alone, Mark!”
I had to make a decision. Touch the top by unroping, getting that “I did it” feeling and hurt my marriage, or turn there, join my wife and comfort her. I contemplated the decision for nearly 10 minutes.

Finally, I decided that my marriage is more important than standing on that little chuck of rock, just a little higher than where I was. I built an anchor and rappelled down to Janelle. Her hands were shaking from fear. This climb had really gotten under her skin. I felt bad. I knew she wouldn’t be talked into going higher, so we rigged the rappel and headed down into the cloud that fully blanketing the south side of the mountain.

Ten rappels later we were back on the glacier, and heading to our tent. It was too late for a heli flight out that night, so we cooked dinner and went to sleep. The following morning we woke to clear skies.  At 9:00AM Wally picked us up and at 9:30 we were back to Petersburg. Heli approaches are so cool. I want one for every climb I do.

Will we go back to touch the top of this mountain? Maybe. I'd like to at some point. Its one of the most beautiful places I've ever climbed, at least when it wasn't raining. I would go back to climb a different route, to explore something else I have not seen before.  There is so much untouched rock out there, and just looking out onto the horizon, seeing all the truly jagged mountains, how could you not want to go back.
by: The Smileys at 12:49 PM