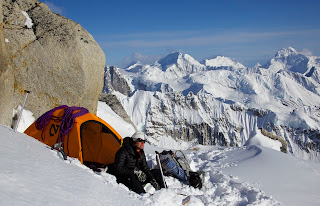 Climbing in the Alaskan Range is the real deal. This real deal experience can be divided into three parts. #1 Planning , #2 Climbing, and #3 Gloating, with #2 requiring the least amount of time of the three.

1) Planning
Three weeks of planning, which included, reading trip reports online, upgrading gear to the lightest and warmest possible, packing, weighting everything, repacking, and repacking again.
We had our eyes set on climbing the Cassin Ridge on Denali. With all that planning and prep for the climb itself, we missed the critical deadline for the climbing permits. The Park requires 60 days notice prior to flying on. I had given them 30 days, and as in many government organizations, there were no exceptions to the rule.
So at the last minute we changed gears and set our site on the West Ridge of Mt Hunter. With it’s reputation being, “ the most difficult 14er in the world”, we had our doubts. Will our muscles (and nerves) be strong enough? Will the weather be nasty? Will the snow be stable? Will our packs be too stupid heavy to enjoy any part of this?
Putting these doubts in the back of our minds, we flew up to Anchorage on April 30th, where our good friends Bob and Celia Lohr, met us at the airport. We were far more organized this year compared to last, so after a quick stop at Costco and REI we were ready for action.
Once in Talkeetna we did a final prep of our equipment and food at the bunkhouse Talkeetna Air Taxi provides complementary to climbers using their services. We packed to be ready to go right from the landing strip to the route. The following morning we were blessed with blue bird skies! Every mountain in the range was out. We piled on TAT’s high-powered Beaver single engine plane equipped with skis for landing on snow, and were off.

2) The Climb
Not wanting to waste any of this good weather we quickly buried our base camp cache, checked in with Lisa, and hit the trail. Not wanting to snowshoe, we had brought our rando skis and boots for the approach and hopefully the climb. Two hours of ski touring and we were looking up at the base of the route. Janelle was not stoked. This thing looked intimidating in photos and down right scary in real life. I was pumped though, so after a little persuading we started up the ridge.

Ascending the first 300-400 feet we were in the “blast zone”, under an active serac that could break off at any time without warning. Putting it in 5th gear, we huffed through the knee deep snow up the 30 degree slope for about 20 minutes until we were clear of the hazard.

Janelle punched though a crevasse shortly after that. She pulled herself out and was unhurt, but it rattled her already sensitive nerves. I took over the trail breaking and we continued up through now hip deep snow. It was slow going. Our packs were full of seven days worth of food and fuel. Even after cutting every with weight, they still weighed about 55 lbs., which is way too heavy to be “light and fast.”

We parked it for the night at the “rabbit ears” rock feature on the ridge. The following morning Janelle was not saying much. On the other side of the rabbit ears was a 300 foot rappel down steep rock and snow. At the fixed anchor Janelle broke down. Rappelling was a huge mental commitment to the route, a point of no return, and she was scared.
My ambition exceeded my fears at that point. I told her that I did not want to turn around because of an unforeseen danger. I wanted to go as long as it was "safe". She made me promise that I would turn around if we encountered a section that was too dangerous to be worth it. I said I would. She looked at me saying nothing. I repeated myself with a little more gentleness. She was back on board, so we threw the ends of the rope down the wall.

The rest of that day and the next were full of steep snowy walls, ice faces, rock sections, pulling on fixed lines, sleeping on small snow platforms and a whole lot calories burnt.

(For fear of having a post that is way too long for any Internet user to actually read, I am going to break this up into two separate posts, so stay tuned for part II.)