It was time for our annual pilgrimage to Yosemite. I look forward to this visit from the time we make our camping reservations at 7:00AM, six months prior to arrival.  Short approaches, great weather, warm temps, and no avalanches or cornices trying to kill us….a welcome change.

Not wanting to waste any time, we planned to climb the Steck Salathe Route on Sentinel Rock with our friend and IFMGA certified mountain guide, Jed Porter, the first full day in the Valley. He climbed Mt. Fairweather with us in June, and we were excited to climb together again.

He brought his long time climbing partner, Ian McEleney, who had done the first winter ascent of the Sierra Palisade Traverse with Jed. This is a serious multiday undertaking in freezing temps.

Janelle and I had climbed the Steck-Salathe in 2010, but left the cameras in the van that time. This time, Jed and Ian would climb ahead and get some, much needed, lead climbing shots. Filming pure rock climbing with only two people gets pretty boring as its either a butt shot of the leader or a top down shot of the second.
The previous experience had spanked me pretty good. I resorted to French freeing through many of the cruxes. “Feels like 5.12, unless you are 3’10” and “very hard, even French free” and “Only easy pitch” are a few examples of the notes I made in the guidebook after our original effort. This time I wanted to do it in better style and send everything.
We started before dawn and made it to the base as the sun began to creep down the Nose of El Capitan across the Valley.

The first challenging pitch was the Wilson Overhang. Last time I had pulled on gear, this time I sent it. My wide crack and chimney climbing technique had improved dramatically over the past three years. This was an encouraging way to see measurable improvement.

Janelle and I swung leads like a well-oiled machine. Jed and Ian stayed just ahead of us, whipping out the camera at opportune moments. This style of run and gun shooting on a 16-pitch climb does not allow for any wasted time. The pressure is on so you have to get the shot when it presents itself and then move on, with no real setup time.

We made it to the top of the Flying Buttress, passed through a cool 2’ wide granite hallway and rapped down for the start of the next pitch.

The “great chimney”, as Allen Steck called it, is the definitive crux of the route. The lower pitch was mine. 5.10b, stupid wide, no “grips” (inside joke), but I got it done. I wouldn’t say it was pretty, or quick, but I sent. I was pumped about that.
This photo (above) is the only way to paint the picture of the next belay. We were roughly 15’-20’ inside the cliff face. Think, vertical caving. This is the start of the Narrows. Allen Steck and John Salathe climbed the outside of the wall on the first ascent in 1950, which avoids the lion’s share of the squeeze chimney. Janelle and I had followed the first ascentist on our first ascent, so we had not been in the slot. This go, we decided to give it a try. Janelle took the lead and did a wonderful job, as did Ian and Jed. They each took roughly 30 minutes to get up this 60 foot section.

I went last. I had sent (climbed without falling or resting on the gear) every pitch to this point and didn’t want to blow it here at the last crux.

Walking my legs up the far wall I was able to get my head, chest and stomach into the narrow section just fine. Now, the problem was that I now had to get my legs from the wide part to the skinny part. This requires some kind of double chicken wing arm bar move.

I am as flexible as a brick. This personal attribute did not help me make any upward progress. Things got ugly. After flexing every muscle in my body and going nowhere, 20 times in a row, I ran out of gas and took on the rope. I blew the send. I was mad. Then I got stuck, and got really mad. The ego spanking I was taking made me madder yet.
There is a section that is so tight, when I’d turn my head from the left to right, my nose would scrape on the wall. Then the backpack that I was trailing started getting stuck below me. It too was a little too wide with two helmets clipped to it.

I lost it. Started screaming at the world. Not my proudest moment.

Eventually I fought my way up, while Janelle performed crevasse rescue on me with a 3:1 pulley. It was miserable. You can’t even call it climbing, more like hangdogging on top rope, only your belayer has tied the rope to a car bumper and is driving slowly away, effectively towing you up. To make things worse, Jed filmed it all. I guess I asked for that one.

Janelle took over and lead the next two pitches, and I took the final 5.6 consolation pitch, tail still between my legs. The four of us were on top with a little daylight to spare.

All in all it was a great day with good friends. I do want to go back and do it again and lead the Narrows clean. First, I need to be able to touch the ground with my legs straight, and be able to sit Indian style with my knees touching the ground. 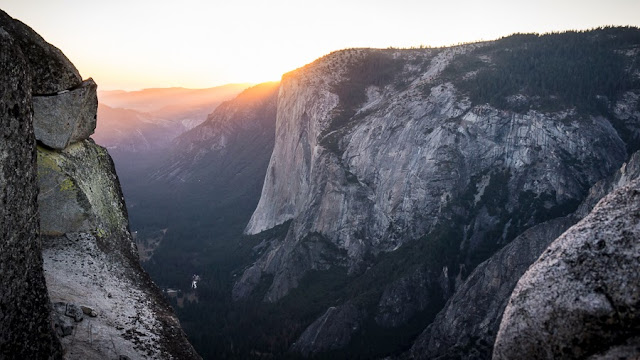 [Note: Following our time in Yosemite we visited Allen Steck, author of the book Fifty Classic Climbs of North America, and first ascentist of this route. It was great to have dinner with him and chat about the climbs he had done over 60 years ago! Watch the video we made about this whole experience, coming Nov. 11 at www.smileysproject.com]