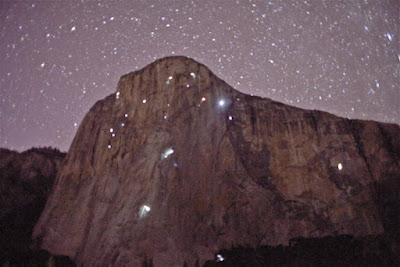 Oct 7th was our fifth anniversary. What better way to celebrate it than climbing the Nose on El Cap?

We had been prepping for this climb for the last few days. Buying 12 $0.79 two-liter bottles of soda for water containers, packing the haul bags, and practicing jugging where all part of the prep. After a casual breakfast we walked to the base of the route, only to see 11 other people on the first three pitches of the climb. We sat down and just watched. Everyone was moving very slowly, so we bailed. 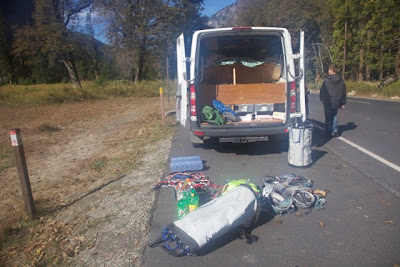 Plan B, the next morning we got up at 3:30AM and were at the base of the route at 4:30. Most parties climb the first four pitches, to Sickle ledge, then haul their bags to that point from the ground. Then the next day jug those lines and continue. Not wanting to get caught up in the mess of the lower pitches we decided to haul our bags from the first pitch up and just keep going. Those lower pitches were tough hauling. It is lower angle and our "pig" weighted about 120lbs, punishing work.

After a summer of light and fast climbing we were in for a healthy dose of slow and heavy climbing, or should I say, manual labor. Hauling is just tough work.

We were gunning for Dolt Tower the first day, but did not make it. Thankfully we had a borrowed portaledge with us, so we were able to set it up at a hanging belay below the Dolt Tower. In the middle of the night we were awaken by two guys flying up the route, hooting and hollering as they climbed. They were on their second lap up El Cap for the day! Moving so fast, so light. We looked at them longingly from our ledge. 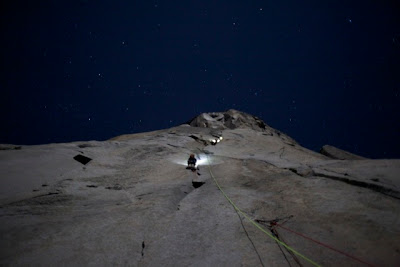 The next morning the progress got a little faster, the pig got a little lighter, and we made it to the top of the boot flake. I thought this was the best campsite I'd ever camped at. The moon was full, we could see everything in the Valley, it was amazing. 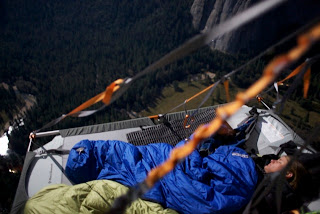 Day three started out with the King Swing. It was my turn to lead, so Janelle lowered me down about 80 feet to the base of the pendulum. I was nervous. Two other parties were watching, along with everyone in the meadows 1500 feet below. I ran to the left, back to the right, and then sprinted back left, pushing as hard as I could. Slapping for a shallow dish of granite I halted my progress. Had I really made it on my first go? Nope. I was too high. So I swung back, lowered down, and tried again. After several airy swings I stuck it, Success! And I caught it all with my GoPro headcam. 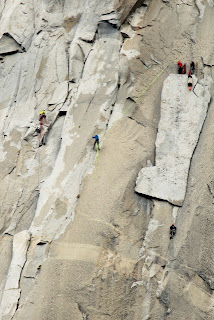 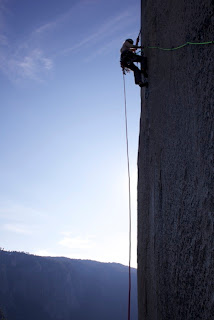 At 1:00PM we got hit by the first sprinkle of rain. Rain was not in the weather forecast. It was forecasted to be clear and sunny for 7 days straight. We trusted that forecast, and therefore did not bring our rain gear, or the fly for the portaledge! Oops. I led another pitch in the spitting rain, and then Janelle took over for the Great Roof pitch. I was pretty damp when she got to the anchor and fixed the rope. I jugged up to Janelle, and we both hung out under the roof, twenty feet to the left of the bolted anchor, hanging in our harnesses and aid ladders. 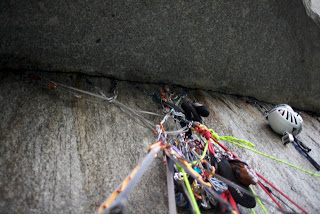 We passed the time looking at the poor guys below us getting soaked. The rain should pass and we would keep climbing, I mean this is sunny California right? Well it didn't. So we decided to built an anchor in the micro crack above us and sleep under the roof, the only place on El Cap not getting soaked. Two hours later we had a 9-piece anchor made out of fixed nuts and C3 cams. We were dry, and I had a new favorite campsite of all time. I'm 99% sure that no one else has ever done that, an El Cap first! 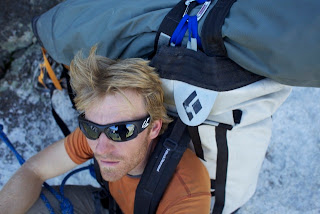 Day four and five went by without event. We topped out at noon on the fifth day. We had done it. It was a great feeling. Even better than that feeling is the feeling we had eating pizza post-shower, later that day! That makes 35 classics complete.

[Please help us reach out fundraising goal, due to end on January 1, 2012 at 11:59PM. Donating will get you some very cool rewards directly from us. And we will be so thankful to be able to keep this journey alive in 2012 with 9 more Classics on the calendar: http://kck.st/u677T4 ]