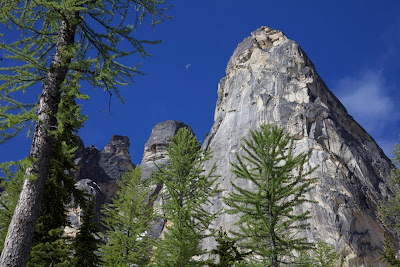 We thought it would be a great idea to climb Liberty Bell on Independence Day. July 4th dawned a cloudy day, but we went for the crack regardless, hoping it would clear. We climbed the first pitch and the clouds rose up from below us and the temperatures dropped. It was not the best day for a 1200 foot tower. So we rappelled down and went to Winthrop to catch the fireworks and thaw our frozen toes.

July 5th: Sunshine! Let’s try again. Three pitches up the sun disappeared, temps dropped, and I wished I had down booties. We fixed two 60 meter ropes to the wall so we could ascend them quickly the following day.

July 6th: The weather guys are calling for higher temps and sunny. We’re ready to get this climb done! Early morning we again hiked up the now familiar trail to the base of the climb, we jugged up the fixed ropes and starting rock climbing. It was warm, we were happy climbers. The white granite felt amazing as we ascended the eight beautiful pitches. After nine hours of climbing we were sitting on the summit in our tee-shirts admiring the beauty of the North Cascades. We rapped down the route we climbed. The top few pitches were a little unnerving to rappel off, for they were high angle traversing pitches that could very likely snag our ropes. Thankfully, ropes came down cleanly and we landed back on the ground just 12 hours later. We walked back down to the car with the satisfaction of the completed climb.